Chad Reed on the podium in St Louis

Chad Reed on the podium in St Louis 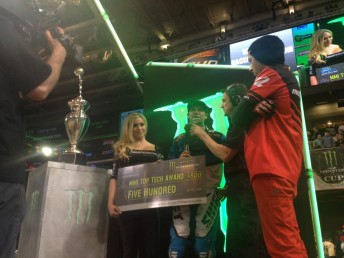 In what was his 150th start in the 450 class, Reed made solid progression throughout practice and qualifying before finishing his heat race fourth.

The Australian got a good start in the Main Event and was sitting fifth before the race was red flagged on Lap 3.

Reed was third after the re-start and held pace with the front runners before fending off a late charge by Ryan Dungey to take the chequered flag behind eventual race winner Ryan Villopoto and James Stewart.

By his own admission Reed was a lot more comfortable on the TwoTwo Motorsports Honda CRF450 tonight.

“That was a much better result tonight,” Reed acknowledged. “I felt that I had a little more fight for the boys.

“I think now the bike is good, it is just up to me to trust it again. Every time out tonight I felt a little more comfortable.

“I feel like we are going in the right direction, it is just trying to get that trust back. Every time I pushed the bike tonight it gave me the right answers so it is up to me to find that little something extra,” Reed said.