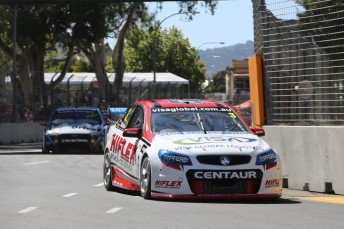 Teams and drivers have completed on-track preparations for the first race of the 2013 V8 Supercars Championship in Adelaide, with Tony D’Alberto topping a tight morning warm-up.

Just one second separated the first 23 cars at the end of the 20 minutes of running, which saw D’Alberto set the best time of 1:22.31s after the flag fell.

The session ran green for its duration, despite James Moffat twice being reduced to a crawling speed in his Norton Nissan with mechanical problems. The former Dick Johnson Racing driver, who will start 13th this afternoon, failed to complete a flying lap during the 20 minutes.

Todd Kelly was the fastest of the four Nissans in 12th after running a pair of somewhat ragged high 1:22s on his first set of tyres.

The Erebus Mercedes entries meanwhile continued to struggle for pace, with Lee Holdsworth the fastest of the trio in 18th.