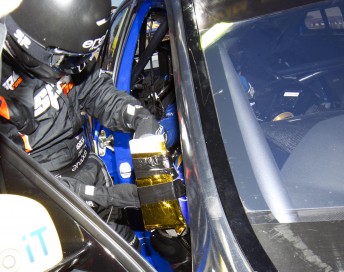 Several drivers were treated for burns after teams were exposed to alarmingly high temperatures of the pedal boxes during the opening 250km race at the Clipsal 500.

Ross Stone, Erebus motorsport general manager, said that the team had moved to put extra measures in place to combat the heat problem.

“It’s just one of those things we were just tight on time all the way through,” Stone told Speedcafe.

“We’ve got a temporary fix for here and we’ll just regroup.”

The new car of the future design has seen the engine shifted backwards toward the firewall, meaning the pedal box is under greater susceptibility to heat.

“The bulkhead that we used to use on the older cars, the engine moved forward (toward the driver) 100mm so I think it’s a bit warmer down around that area.

“We thought it would be and we had done some stuff to react to that but obviously we’ve got a bit more work to do.”

Holdsworth said that it became difficult to cope with the heat early on in the race.

“In the pit stop we had to put something under my foot to separate my race boot from the pedal,” Holdsworth said.

“I lost the feeling in my foot halfway through the race but I just wanted to get it through to the end and we achieved what we wanted to achieve.”

Kelly said he started feeling the heat by lap 30.

“My right foot is a little bit hot, but it’s a bit stronger than some of the other drivers because I’ve spent my childhood walking around Mildura with no shoes on!” Kelly told Speedcafe

“We need to get a little bit more cooling in there, for sure. We all had to buy Triple Eight’s pedal box, so maybe they need to tell us how to keep them cool!”