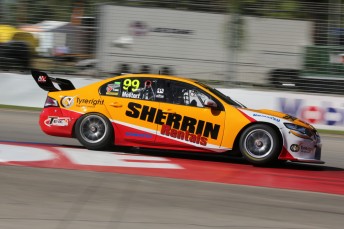 Chaz Mostert has taken victory in the opening round of the 2013 Dunlop Series after a dominant performance in the second and final race of the weekend.

Having finished second in Friday evening’s opening race, Mostert led every lap of the second encounter, leading by as much as four seconds before easing up his pace in the closing stages.

Walsh dropped to as low as fourth behind Mostert, Wood and Andrew Jones on the opening lap before retaking the Brad Jones Racing Holden to secure second overall for the weekend.

Jones held down fourth until slowing with a flat left-front tyre mid-race. He eventually finished 26th.

V8 Supercars debutant Casey Stoner headed in the opposite direction, taking 14th from his 30th place on the grid.
The former motorcycle star methodically picked his way through the traffic, making calculated overtakes at each of the circuit’s key passing points.

Further up the order, Kristian Lindbom rounded off an outstanding Dunlop Series debut for Evans Motorsport, taking fourth in both Race 2 and the round.

Taz Douglas emerged from the midfield to take fifth in the second encounter ahead of Aaren Russell, George Miedecke, Cameron Waters, Daniel Gaunt and Geoff Emery.

The second round of the 2013 Dunlop Series will take place at Barbagallo Raceway on May 3-5.

See below for the Round 1 result