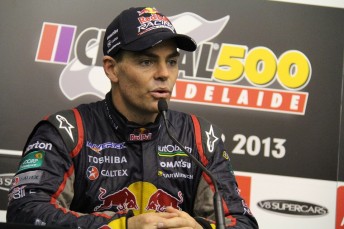 Craig Lowndes believes that the 2013 season will provide a variety of winners, despite recent category dominators Red Bull Racing and Ford Performance Racing locking out the podium in Adelaide’s opening race.

The two teams have won every V8 Supercars Championship race between them since Rick Kelly’s triumph in wet conditions at Sandown in 2011; a full 35 races ago.

Although the best non-Red Bull or FPR car, the Fujitsu GRM Holden of Alexandre Premat, finished a full 35 seconds behind the race winner today, Lowndes says that the speed of several others indicated it’ll be a competitive season.

“I think if you look at it, Shane van Gisbergen had a problem, Frosty (Mark Winterbottom) had a problem, Fabian Coulthard had a problem…,” he said, noting those who figured prominently before striking mechanical troubles.

“Today you’re seeing the same faces but I think that the Car of the Future has thrown in a different mix and we’ll see over time some different results as well. There’s no doubt about that.

“Give it a couple more rounds to let people get the cars sorted and I think you’ll find different winners.”

Lowndes’ win marked his first triumph in Adelaide since the corresponding Saturday race in 2005, and moved the 38-year-old to equal-first on the all-time race winners list with Mark Skaife.

Lowndes was quick to downplay the significance of the latter milestone after the race.

“To be honest I wasn’t thinking about it, but now knowing about it, hopefully it’ll be satisfying when I beat it,” he said. “If I do it I’m sure Mark will come down and thank me.”

The second race of the 2013 V8 Supercars Championship will round out the Clipsal 500 event tomorrow.