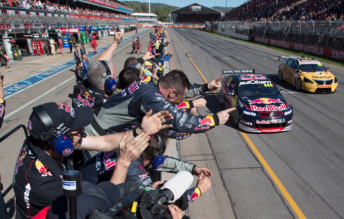 Craig Lowndes has joined Mark Skaife at the top of the all-time V8 Supercars/ATCC race winners list with victory in the opening leg of the 2013 Clipsal 500.

The Red Bull Racing Australia driver proved the class of the field in the first ‘Car of the Future’ era race, leading home the FPR Falcon of Will Davison by over 20 seconds.

Jamie Whincup completed the podium despite struggling for outright speed in a race that ran green for its entire 78 lap duration.

The race got off to a chaotic start with pole-sitter Shane van Gisbergen dropping to 10th after stalling, handing the lead to Winterbottom.

The Pepsi Falcon only headed the pack for a handful of corners before it struck more permanent problems in the form of a broken gearbox.

That left Fabian Coulthard with the top spot – a position he held until being jumped by Lowndes and a short-pitting Whincup at the first round of stops.

Lowndes set about building a comfortable margin in the second stint as a struggling Whincup held Coulthard behind.

Coulthard’s fuel-in-hand advantage then saw the Lockwood Holden back ahead of Whincup after the second stops before a brake problem emerged with less than 15 laps to run, resigning Coulthard to a 19th place finish.

Van Gisbergen, meanwhile, had fallen out of third position with a broken gearbox just two laps before Coulthard’s problems struck.

The misfortune of the Kiwis played into the hands of Davison, who had been as low as 10th at half distance after undertaking a long first stint.

The race was a largely straight forward affair for Alexandre Premat, James Courtney, Scott McLaughlin and Garth Tander, who filled fourth through seventh at the flag, while Jonathon Webb’s eighth place came despite heavy contact with the Turn 4 wall while running sixth in the closing stages.

Alex Davison and Russell Ingall rounded out the top 10, with the latter having survived a hefty hit of his own against the Turn 11 exit wall early in the going.

Rick Kelly’s Nissan Altima survived to be the best of the new manufacturer entries in 11th, while Tim Slade was four places further back in the top Mercedes.

The race went rather less well for Nissan pair Todd Kelly (whose Altima completed a smokey 16 laps before retirement) and Michael Caruso (who lost time with power steering problems).

Lee Holdsworth struggled with extreme temperatures in his Mercedes on the way to 17th, but at least fared better than Maro Engel, who lost laps early when electronic problems saw the German stranded on the grid.

Another out of contention early was David Reynolds, who pulled his FPR Falcon to pitlane at the end of the warm-up lap with driveline issues.

Just 13 cars took the chequered flag on the lead lap.

See below for Race 1 results:

See below for Speedcafe.com’s live Tweets (@speedcafe) from Race 1 of the 2013 V8 Supercars Championship

Engel car is stationary on grid. “The throttle pedal is giving me nothing at all,” he says #V8SC

Engel still trying to fire the car, which is being pushed down the front straight #V8SC

“Whatever happened out there I couldn’t get third gear,” says Winterbottom, who now says it’s fine and he wants to rejoin #V8SC

“I don’t know what happened mate. It kept crunching into third – I couldn’t get it,” adds Winterbottom as he rejoins #V8SC

Bright meanwhile pitted on just the second lap, but has now rejoined #V8SC

Smoke is pouring from the back of Todd Kelly’s Nissan. He’s running 21st #V8SC

Van Gisbergen passes Courtney, moving back up to seventh having dropped as low as 10th on the opening lap #V8SC

Replays show that Blanchard was tagged into a spin at Turn 6 by Todd Kelly, which ended with a brush against the tyre wall #V8SC

Todd Kelly’s Nissan is still smoking on the circuit #V8SC

Coulthard enjoys a 1.7s lead over Lowndes after 11 laps and says he’s just driving to the gap #V8SC

Replays confirm that Ingall gave the Turn 11 exit wall a fair whack with the right-rear. He continues on track #V8SC

Engel says the engine is not revving-up cleanly any more. He’s in the garage #V8SC

Holdsworth is overheating in his car. “I need a heap of cold water splashed on me,” he says as he pits #V8SC

Lowndes finally pits from second on Lap 24. He had been one second adrift of leader Coulthard #V8SC

Van Gisbergen is third, 10s behind Coulthard, and will pit this lap. Coulthard in too #V8SC

Coulthard has rejoined behind both Lowndes and Whincup, but appears to have taken on more fuel than his Red Bull rivals #V8SC

Davison pits after 31 laps for fuel, tyres and a mirror tweak #V8SC

Davison rejoins in 10th – splitting Tander and Bright, but has fuel-in-hand over those around him #V8SC

Holdsworth told the Erebus crew have another ‘foot pad’ ready for his next stop, expected in 11 laps time #V8SC

Engel’s car is crawling down the back straight. He’s already 11 laps down #V8SC

Lowndes continues to ease away at the front. He resets the fastest lap last time by to 1:22.55s #V8SC

Davison has taken McLaughlin for eighth. The Pepsi Ford is just 13s off second place  #V8SC

Whincup pits on Lap 46 for tyres and fuel #V8SC

Coulthard, Webb and Ingall pit. Lockwood Holden returns to the track in front of Whincup as expected #V8SC

Van Gisbergen pits. He rejoins behind Coulthard but ahead of Whincup #V8SC

Coulthard is stuck in traffic. Van Gisbergen closes in #V8SC

Lowndes pits on Lap 52. Will Davison takes the lead but needs to stop again #V8SC

Lowndes rejoins with a big lead over Coulthard. Davison slots into sixth behind Webb #V8SC

Van Giz stuck behind lapped Fiore. “Flash your lights and give him a touch up,” engineer Blake Smith tells SVG, who gets by cleanly #V8SC

Webb is pressing on despite a sizeable hit. A big accident was only narrowly avoided as Webb reversed out of the wall #V8SC

Van Gisbergen has pitted and is in the garage. Team being told to look at his burning feet #V8SC

“I’ve pretty much got no brakes,” says Coulthard, who is told to bring it in #V8SC

Coulthard returns to the track after a brake fluid top-up. He’s 19th #V8SC

Lowndes has started his last lap. He’ll match Mark Skaife’s all time race win record of 90 if he brings this home #V8SC

“Thanks guys, what a bloody day,” says Lowndes #V8SC

“I think this car suits my style a bit better than last year. You can flow the car and look after the tyres.”

“I can honestly say this is the best Car of the Future I’ve ever driven.”