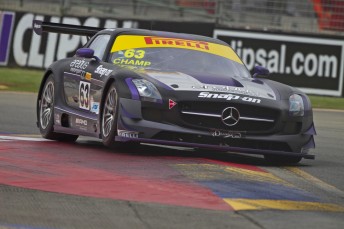 Craig Baird has continued his unbeaten run at the 2013 Clipsal 500 adding an Australian GT Championship, presented by Pirelli win to his two Porsche Carrera Cup wins in a safety car punctuated race one on the streets of Adelaide.

Baird got the best of the start in his Erebus Motorsport SLS AMG GT3, leaping team-mate Christian Klien off the line. Klien was then taken by the Porsche of Klark Quinn on the opening lap.

Whilst Baird skipped away at the front, the battle between Quinn and Klien was intensifying. Erebus Motorsport pitted Klien at the opening of the Compulsory Pitstop Window to get him some clear air.

With 25 minutes to go, the Ginetta of Mark Griffiths exploded exiting turn one and he spun to a firey halt.

An extended Safety Car period where Baird pitted, the field was jumbled after Baird was waved around. Whilst Baird benefitted significantly, one of those to be a victim was Klien.

Once the race got back underway, Rod Salmon hit the wall exiting turn eight in his Audi, triggering a brief safety car to clean the track.