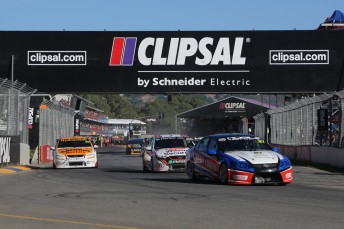 The Matt Stone Racing Ford driver made the most of a chaotic start to take the lead from Wood and pole-sitter Mostert heading into the first corner.

An issue with the starting procedure had caused widespread confusion off the grid, with some drivers, including Mostert, momentarily backing off thinking that the start had been aborted.

Walsh spent much of the race with a near two-second margin over Wood, who was being harried by Mostert.

Mostert eventually found a way around his team-mate on Lap 15 of 20. Despite taking just two subsequent laps to close down Walsh, Mostert was unable to steal the win.

Ironically, Walsh’s cause had been helped by a yellow flag at Turn 9 for the crashed third MWM Ford of Morgan Haber.

The race’s star attraction, Casey Stoner, spent the second half of the season opener stranded inside his crashed Triple Eight Holden at the exit of Turn 4.

The former motorcycle ace had been running 15th when a sudden tyre deflation saw him clout the Turn 3 exit wall. The 27-year-old had gone off at the Turn 14 hairpin on the previous lap after a large front lock-up.

Stoner had run as high as 10th in the early laps after pulling off a clinical passing move into Turn 9 on Aaren Russell, who eventually finished a strong ninth.

The Dunlop Series competitors will return to the track for their second and final race of the weekend at 1235 local time tomorrow.