Walkinshaw Racing has made a blistering start to V8 Supercars’ new Car of the Future era by sweeping the top three places in the opening practice session in Adelaide.

Garth Tander ended the 30 minute session fastest from James Courtney and Russell Ingall, with the trio separated by 0.5s.

Ingall set the early pace prior to a red flag at the eight minute mark to recover the Dick Johnson Racing Falcon of Jonny Reid, which had stopped on the circuit at Turn 5.

Tander and Courtney swapped the top spot upon the resumption of proceedings, with the 2007 champion leaving the benchmark at 1:22.02s with the final lap of his second run. The time is a full second quicker than the best set in the opening session of 2012.

The two HRT entries then made lengthy pitstops for changes before returning to the track for a single evaluation lap. 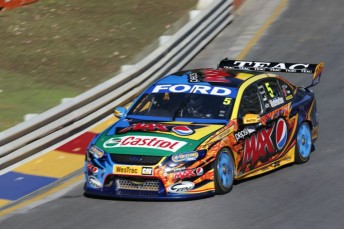 Shane van Gisbergen made a positive start to his tenure with Tekno Autosports, beating Red Bull Racing Australia duo Jamie Whincup and Craig Lowndes to the fourth fastest time with a late effort.

Fabian Coulthard was seventh despite a mid-session spin at Turn 9, while Will Davison, Mark Winterbottom and Scott McLaughlin completed the top 10.

Rick Kelly’s Nissan was the best of the new manufacturer entries in 11th, less than a second adrift of Tander in an Altima that appeared particularly uncomfortable over the Adelaide circuits many bumps.

Tim Slade led the Erebus Mercedes charge in 18th ahead of Holdsworth in 20th and German rookie Maro Engel in 27th.

Reid’s car returned to the track late in the session to lap within 0.1s of Engel, with the duo in excess of five seconds off the pace.

The 30 minute hit-out took place in cool but sunny conditions. A top of 27 degrees is expected in Adelaide this afternoon.

Practice 2 will get underway at 1115 local time.