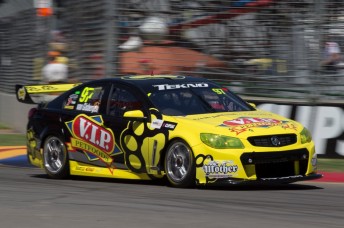 Shane van Gisbergen insists that the possibility of legal action over his recent team defection will not distract his bid to turn pole into a race win at the Clipsal 500 Adelaide tomorrow.

Having been released from a fresh three-year contract with Stone Brothers Racing at the end of last year citing ‘burn out’, Van Gisbergen returned to competition today with Tekno Autorsports in impressive fashion, scoring a second career pole position.

With an injunction against him competing for his new team thought likely to be handed down at some stage during the weekend, the 24-year-old New Zealander was predictably reluctant to discuss his tumultuous off-season in the post-qualifying press conference.

Initially telling assembled media that he had no comment to make on any aspect of the situation because he had already undertaken a yet-to-be-published interview with a News Limited newspaper, Van Gisbergen eventually added some guarded thoughts.

“I’ve obviously read it (the media speculation about the possibility of legal action) and heard about it all but when I was out there in the car I can’t say I was distracted at all,” he said when asked if it was affecting his weekend

“The best place for me is when I’m out in the car. The car is good and I’m driving well.

“It was really awesome today just to get out there and get on with it. Hopefully people stop talking about it.

“I’m just trying to do my best on the track and I think I did that today,” he added of the possibility that finding immediate success with Tekno could increase the chances of legal action.

Van Gisbergen also made brief reference to the struggles of his former team , which endured a difficult first hit-out in its new Erebus Motorsport Mercedes guise.

“Seeing how my last team went confirms that I’ve made the right decision,” he said.

“I think it’ll be all about reliability and getting to the end,” he said of the race.

“It’s a bit of an unknown how tough the cars will be over the kerbs, but I think with the pace of the car today and how it felt over the kerbs there’s no reason we can’t contend for it.

“Just to be in the top five or on the podium, I’d be stoked.”