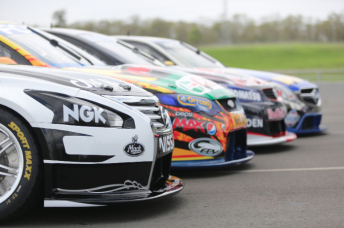 V8 Supercars is analysing a raft of cost saving measures for its teams as the category attempts to combat reduced revenues.

The championship’s competitors have had to fund the changeover to the Car of the Future this year amid a major decrease in Race Entitlement Contract revenues and a difficult sponsorship market, leaving several struggling to balance the books.

V8 Supercars has delegated its independent commissioner Chris Lambden to communicate with teams on ways to reduce operational expenditure across the board.

The recent reduction in team test days for this year was the first clear sign of the cost-cutting drive, while the potentially carnage-laden double-file restarts have also been a late casualty of the new agenda.

CLICK HERE for the previous story on the reduction of test days.

“Commercially, it’s tough out there no matter what business you are in and teams are struggling. If revenue is down, you have to try and save some costs,” Lambden told Speedcafe.com.

“As the independent commissioner, I was asked to play a part in that, and the vibe I got from the teams was, mostly, very positive. They were pleased that V8 Supercars has taken the initiative to look at it.

“The whole idea was to get an idea of what they’re thinking, to see where they think we could help them to save costs in their business, to get their reaction to our ideas, and make changes without negatively affecting ‘The Show.’

“The test day cut-back is the first result of that. The cost of doing a test day is not inconsiderable and the reduction was unanimously supported by the teams, so that happened really quickly.”

More operational and technical changes are expected to be introduced throughout this year as well as for the 2014 season.

As a co-owner of one of the non-factory backed teams on the grid, Kim Jones told Speedcafe.com that he’s all for the move to cut costs, but stressed that the impact of any change needs to be considered for each team’s level of financial status.

“It’s a constant review process all the time. It needs to be talked about, but I think the thing is if that they don’t change the rules, that will save us costs.”

Jones is also keen to explore a move to reduce workload on staff, saying that he is already finding it hard to recruit new staff and fears that the off-season rush of building the new generation Car of the Futures has burnt his staff out.

“One element is saving money, and the other is that that we need our staff to cope better with workloads,” Jones told Speedcafe.com.

“We’re fast getting into an environment where it’s hard to get people employed. After Sydney, the only time they’ve had off is public holidays, and even after the test in Sydney, our guys worked all night Monday and Tuesday until the car went into the truck to come to Adelaide.

“Yes, the cash component is important going forward, but we need to make sure the people in the industry we employ is that they have a life, otherwise they’ll walk away.”