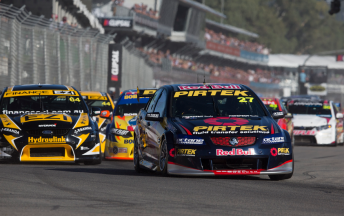 Casey Stoner battled in the mid-pack before crashing out

It was an upbeat Casey Stoner that faced the media after crashing out of his maiden Dunlop V8 Supercars Series race on Friday evening at the Clipsal 500 Adelaide.

The former two-time MotoGP World Champion had been running 15th halfway through the 20 lap race when a right-front tyre went down, pitching the #27 Red Bull-Pirtek Holden into the Turn 3 exit wall.

Stoner had run as high as 10th in the early going before a lock-up spelt the beginning of the end.

“Right at the beginning of the race we started to get a bit of locking on the inside front tyre,” Stoner explained afterward.

“I locked up big-time going into the last corner and then started to drop back trying to save the tyre so that I could finish the race.

“I kept locking up here and there and got too much of a flat spot on it and it popped on me coming through Turn 3.

“Once the tyre burst I was in for a ride. I tried to save it as much as I could but it was game over.”

Despite the attention on him heading into the race, Stoner said he was not anxious when lining up 12th on the 30 car grid.

“I’d say before first practice we were a little bit nervous but after we got that out of the way everything was good,” he said.

“Everybody on the track has been very good with us and it’s been a good learning experience.

“If I’d made a big mistake and put myself in the wall I would have been more disappointed but at the moment it was a flat spot and I probably should have come in.

“Everything that I thought was going to be worse for me as far as around other cars and getting used to looking in mirrors was honestly a lot easier than I thought it’d be,” he added.

“I don’t think it’s going to put me in a good grid position (for tomorrow) but with the little bit of data that we got we can tune the car up a bit slightly and see what we can do tomorrow.”

Stoner will start the second and final Dunlop Series race of the weekend from last on the grid.