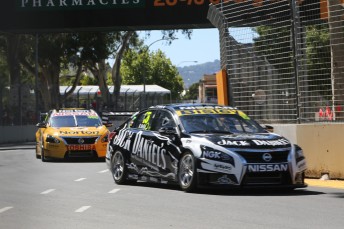 Todd Kelly remains buoyed by the potential of the Nissan Altimas after the squad survived practice and qualifying without any major failures.

The Norton 360 pair of Michael Caruso and James Moffat finished 13th and 14th in qualifying while Jack Daniels pair of Todd and Rick Kelly ended up 17th and 19th.

It was a predictable outcome with the Altimas suffering a horsepower deficiency that was noticeable on the split times around the 3.22km circuit.

The team is planning to spend more time on the dynos and will fit fresh cams into the engines.

“I’m pretty happy. We always would have liked to have been a bit further up but we knew it would be a struggle to start with,” Kelly told Speedcafe

“When you look at the sectors we’ve been filling the bottom few spots up all the straights but not so bad in the corners.

“There’s a lot of potential there. Probably the biggest thing I’m happy about is that we had all four cars run each session without any major reliability issues. We haven’t done many miles at all.

Kelly said the first qualifying effort of the new-age Nissan assault on V8 Supercars was what his team expected.

“For a first day of competition it is what I expected pace wise. So I would give it an eight or a nine (out of 10) for what the guys have done to get here.”T

The Braeside-based team will concentrate on extracting more horsepower out of Patrol 4WD-sourced powerplant.

“With more time on the engine we know that the rest of it will come,” Kelly said.

“We’ve got a few different cams which will make a bit of a difference and we plan to put in all the cars so we are getting there.”