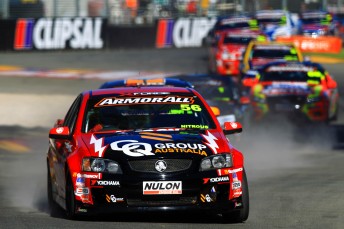 Milwaukee Racing driver Nathan Pretty has won the opening race of the 2013 Auto One Australian V8 Ute Racing Series – protected by Armor All.

After securing pole in this morning’s qualifying session, Pretty jagged the holeshot and from there was never touched in what was a typically argy bardgy battle of V8 Ute racing.

The opening race of the season kicked off in a surprisingly clean fashion but lap four saw mayhem when Kim Jane got sideways at turn one spearing his #27 Commodore into the concrete wall at Centre Chicane.

“There’s a fair bit of damage. We’re going to work our hardest to have it ready for tomorrow but at this stage we don’t know if we’ll make Race 2 until we assess the damage,” said Jane.

While Jane walked away unscathed, the race was yellow flagged as recovery crews spent three laps removing the stricken ute from the track before things could resume with a quick, two-lap sprint to the finish.

The restart saw Troy Dontas in all sorts as he locked things up heading into Centre Chicane and careered into the concrete wall.

The Clipsal 500 event enjoyed another very successful day with attendance figures of over 67,000 once again surpassing last year’s numbers.

Race 2 of the Australian V8 Ute Series kicks off tomorrow at 10.25am local Adelaide time.

See below for Race 1 results