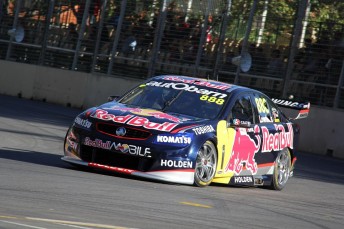 Craig Lowndes will be the last man out in this afternoon’s Top 10 Shootout after topping an extraordinarily close qualifying session on the streets of Adelaide.

Lowndes’ best early time of 1:20.8731s was matched to all four decimal places by Shane van Gisbergen as the chequered flag fell – with the Red Bull Holden driver keeping the top spot on the account of having set the time first.

Lowndes had elected not to return to the track for the final six minutes following a lengthy red flag delay caused by Maro Engel’s Mercedes expiring at Turn 4.

Despite the Mercedes having dropped coolant throughout the opening four corners, several drivers managed to improve in the closing stages, with Jamie Whincup, Will Davison and Fabian Coulthard securing third through fifth respectively on their last laps.

Scott Pye missed out on the top 10 by just one place after an impressive performance on debut as a full-time driver.

Michael Caruso was the best of the Nissans in 13th and will share the seventh row with team-mate James Moffat. All four Altimas in the field managed to lap within a second of pole.

The best of the Erebus Mercedes entries, Lee Holdsworth and Tim Slade, are back on row 12, while Engel will start from the rear after his issues.

The biggest scalp of the interrupted session was Garth Tander, who had been mired down in 18th when the red flags were thrown. He will start 18th, despite improving his time on his final lap.

See below for the full Qualifying result