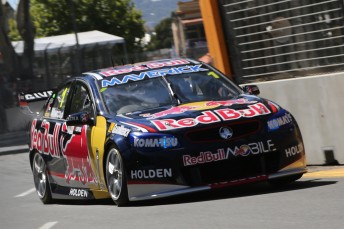 Reigning V8 Supercars Champion Jamie Whincup has set the pace in the second of four Friday practice sessions at the Clipsal 500 Adelaide.

The Red Bull Racing Australia driver clocked a 1:22.00s best at the end of first run before heading to pitlane for lengthy changes, and was unable to improve in his two subsequent on-track spells.

Shane van Gisbergen split his session into two, moving to within 0.02s of Whincup on the first flying lap of his second run.

Russell Ingall repeated his Practice 1 effort of third place having, like Whincup, set his best time on his first set of tyres.

Winterbottom’s FPR Falcon was the only non-Holden in the first 13 cars.

Like in Practice 1, the majority of teams and drivers continued to struggle with rear-end stability in their cars, which this year feature independent rear suspension as part of the new Car of the Future regulations.

Michael Caruso led the new marques with the 14th fastest time in his Nissan, improving to within 0.7s of Whincup’s best.

Team-mate Rick Kelly, who had been an impressive 11th in Practice 1, struggled with a variety of mechanical and handling issues in the second hit-out, ending up 24th.

Lee Holdsworth was the fastest Mercedes in 18th, just 0.06s slower than Caruso.

A mere 1.5s covered the first 26 cars, while Maro Engel and Jonny Reid brought up the rear of the field, as they did in Practice 1.

Unlike the morning session, Practice 2 ran green for its entire duration.

The third V8 Supercars practice session of the day will kick-off at 1230 local time.