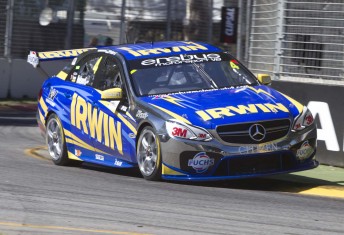 The three-pronged AMG Erebus squad is facing a difficult initiation in their V8 Supercars debut after a tough qualifying session for the Clipsal 500 in Adelaide.

Engel was forced to shut down the AMG powerplant after smoke began pouring out of the bonnet when he spun on his car’s oil.

It signalled the first reliability issue of the new generation V8 Supercars ahead of what is one of the most demanding meetings on the calendar with twin 250km races on Saturday and Sunday.

“In qualifying we developed the car to a level I was happy with. We maintained a good run and I was pretty happy with my first stint.  I was really looking forward to my second stint, but obviously that got cut short,” Engel explained.

“There was some smoke inside the car, the car then spun on the turn and I shut it down, I think whatever it was is pretty minor from what I could see and I’m sure the guys will fix it.”

Engel will be forced to start the opening 250km race from 28th position while the other two Erebus machines of Lee Holdsworth and Tim Slade will line up from 23rd and 24th on the grid.

While the team explained that it was a ‘minor component failure’ the team is now going over its cars with a fine tooth comb as it is paramount the AMGs need to log as many race miles as possible over the weekend.

Holdsworth (Irwin Racing) confirmed that Erebus did not expect to be fighting for a forward grid position and are pushing to pick up as many positions and points as possible.

“We never expected to be up the front and we didn’t really set expectations for qualifying. It doesn’t really matter where we qualify to be honest. We just wanted to circulate through the races, pick up some spots and points, and hopefully improve the cars over the weekend,” Holdsworth said.

Slade (Heavy Haulage Australia) said the team was underdone going into its debut meeting and he wasn’t surprised by the lack of qualifying pace.

“The car ran faultlessly all day and we didn’t have any dramas.  We knew we were not where we wanted to be coming into the race meeting in terms of development which results in track performance,” Slade said.

“I guess this is really a big test session for us and we keep developing areas of the car to try and get a direction, which is what we have to keep doing this weekend.”

Erebus chief executive Ryan Maddison said it was unfortunate that Engel could not do the full distance in the 20-minute qualifying run.

“Maro’s progress was where we expected him to be with the new track and car environment. It was unfortunate he could not complete the qualifying session due to an incident resulting from the failure of a minor external part,” Maddison said.