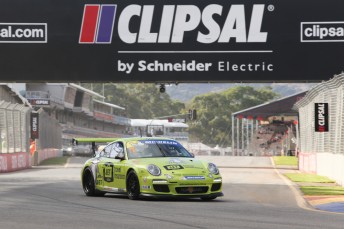 Craig Baird has kicked off his title defence in perfect fashion, winning the opening race of the 2013 Porsche Carrera Cup on the streets of Adelaide.

The New Zealand hero jumped pole-sitter Nick Percat off the line, led into the Senna Chicane and was never seriously headed over the 10 lap race distance.

Passing proved difficult for the rest of the field, with the finishing order sorted by the first corner. Steve Richards leapt from fourth to beat Warren Luff into the the chicane, and the pair remained in that order for the duration.

Shae Davies and Karl Reindler held their positions to take fifth and sixth, while Steve Johnson dropped from seventh to eighth – passed by Matt Kingsley.

James Koudnouris and Max Twigg rounded out the top 10.

The most serious incident of the race saw Team BRM’s Duvashen Padayachee take Marc Cini out at the hairpin, spearing into the side of the Cini’s car. Both cars retired from the race and caused a Safety Car.

Carrera Cup returns to the track at 0950 for Race 2 tomorrow.

See below for Race 1 result