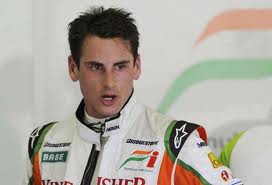 German driver Adrian Sutil has done a 360-turn by finding his way back into grand prix team, Force India.

Sutil, 30, was confirmed alongside Scot Paul di Resta at the F1 testing in Spain.

He has worked his way back into grand prix racing with after edging out French youngster Jules Bianchi.

Sutil is expected to bring a decent sponsorship package with him for his re-entry back into the grand prix-fold.

He will test for three days from today with the British-based squad.

Sutil’s career was in a shambles in 2011 after he was convicted and fined $167,000 pounds and given an 18-month suspended sentence for causing grievous bodily harm.

F1 testing continues over the weekend at the Barcelona circuit.

Webber cut a 1:22.693s lap time on soft compound Pirelli tyres with just seven minutes of running remaining. Lewis Hamilton, who incidentally is a close personal friend of Sutil, was 1.655s off Webber’s pace in his Mercedes.