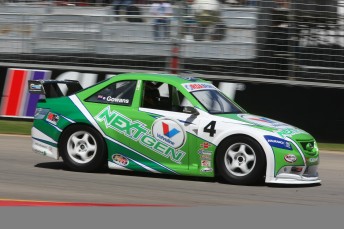 Adam Gowans has taken his second consecutive race win in the Aussie Racing Cars series at the Clipsal 500 today.

The 2009 class champion was pushed to the limit by Trent Young to secure the win in a nose-to-tail, final lap showdown.

Young finished a clear second for the second race running with Maurice Masini picking up third as the Race 2 podium was a mirrored image of yesterday’s.

Queensland’s Travis Edwards finished up in fourth with former V8 Ute and MINI Challenge competitor Sean Carter rounding out the top-5 behind the wheel of his Hi-Tec Oils Holden Cruze.

Adam Uebergang found trouble on lap one at the hairpin, spinning his number 63 Falcon but managed to regather and finish 26th of the race 39 starters.

It’s another short day for the Aussie Racing Cars tomorrow with just one, seven lap race commencing at 9.20am local time on the streets of Adelaide.