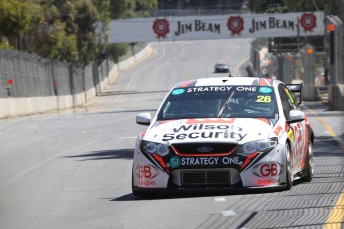 Dale Wood led the way ahead of qualifying

The Matthew White Motorsport Fords of Dale Wood and Chaz Mostert have led the way in a tight second practice session for the Dunlop Series on the streets of Adelaide.

Wood knocked Mostert from the top of the time sheets halfway through the 30 minute hit-out, with the latter falling just 0.05s short of returning the favour at the end of his penultimate run.

The top five was completed by Andrew Jones, Geoff Emery and Ashley Walsh, who all lapped within 0.17s of Wood’s best effort.

Having been 1.2s from the pace in Practice 1, the former two-time MotoGP World Champion was just 0.7s from the top spot in the second session.

Daniel Gaunt was ninth despite losing considerable time mid-session with a fuel pump issue in the ex-Tekno Autosports Triple Eight Holden, while Garry Jacobson rounded out the top 10.

The session ran free of red flag periods, although it ended with the cars of Aaren Russell and Chris Pither both stranded on the circuit.

Aaron Tebb endured an early incident in his Commodore, tagging the Turn 5 exit wall during a half-spin.

The Dunlop Series field will return to the track for qualifying at 0955 tomorrow.