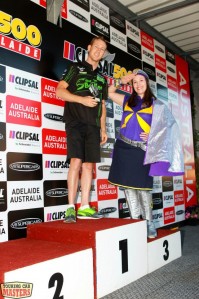 David Reynolds on the Clipsal 500 podium

Before the V8 Supercars fired a shot in race conditions, the Bottle-O Racing driver David Reynolds was already a winner on the streets of Adelaide.

The Ford star was a guest driver in the Touring car Masters Billy Kart Challenge, raising money for the Starlight Children’s Foundation – the official charity of the Clipsal 500.

The 24 competing karts, built by students from the Prince Alfred College, were raced by a combination of V8 Supercars drivers, Dunlop Series, V8 Ute and Touring car Masters drivers.

Despite the Touring Car Masters class not being a support category at this year’s event, the administrators of the class wanted to remain active at the event and continue their yearly tradition of hosting the Billy Kart charity races for charity.

The fun event raised $16,761, with more money donations said to be rolling in.