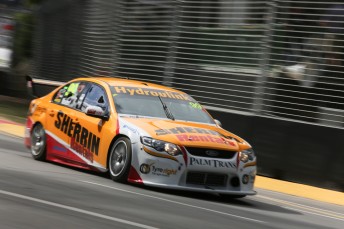 Chaz Mostert has firmed as the favourite for the 2013 Dunlop Series title by setting the fastest time in the opening practice session at the Clipsal 500 Adelaide.

Ashley Walsh was third fastest despite missing the majority of the session thanks to a crash at Turn 8. The Matt Stone Racing Ford sat parked at Turn 10 for the final 20 minutes after contact between its right-rear corner and the Turn 8 exit wall.

Walsh had set the fastest time to that point on the lap prior to his mistake. 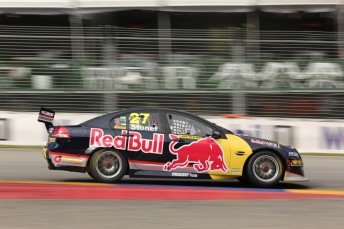 Casey Stoner was ninth fastest on debut in the Dunlop Series

Stoner, as did many of the drivers, steadily improved his pace throughout the opening session, beginning, fittingly, in the 1:27s bracket.

“He finished top 10 with plenty of experienced guys all around him and behind him. So he is in the thick of the action. He didn’t touch anything, he didn’t hit anything. He did a great job first run out and I’m sure he’ll be more relaxed now.”

It was a difficult start to the season for new squad Finance Ezi Racing, whose Andre Heimgartner and Josh Hunter driven cars both stopped on their out-laps, necessitating a lengthy red flag.

The first 10 minutes of Practice 1 were available to rookie drivers only, with Tony D’Alberto Racing’s new recruit Nick McBride setting the early pace.

The second and final Dunlop Series practice session of the day will get underway at 1445 local time.