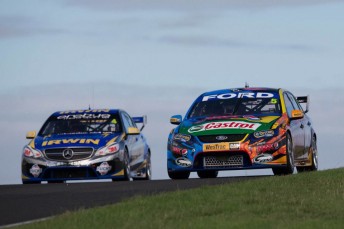 The V8 Supercars field will not have to contend with double-file Safety Car restarts at the Clipsal 500 Adelaide this weekend after a late rethink of the new regulations.

A decision not to follow every Safety Car deployment with double-file restarts was taken after trials of the procedure at the recent Sydney Motorsport Park test left many concerned that it would cause unnecessary carnage.

The two-by-two rolling formation is now only expected to be used by the category to begin the second leg of the ’60/60 Super Sprint’ races scheduled to run on the Saturday at the Symmons Plains, Barbagallo, Hidden Valley, Queensland Raceway, Winton and Phillip Island events.

“To do what they were going to do and have every restart like that (double-file), untrialled, was a silly call,” Ford Performance Racing’s Mark Winterbottom told Speedcafe.com in Adelaide.

“I don’t think the double-file should have been introduced in Adelaide or Bathurst or any of these events, but the way they’re planning on doing it now (in the 60/60 races) is good as it will serve as a bit of a trial.”

Although only half the field decided to take part in the Sydney restart practice, those towards the back of the pack, such as Nissan Motorsport’s James Moffat, were most concerned by the potential for carnage.

“Rick (Kelly) and I purposely hung back (in Sydney) to get an idea of what it’d be like back there, and the biggest thing was that we couldn’t even see the green flag,” Moffat told Speedcafe.com.

“That was potentially going to cause a bit of drama in my opinion. The restarts probably would have been fine here (in Adelaide) for the guys in the first couple of rows who can see the green flag and what is going on, but once you start getting a bit further down the field it would have been just carnage central.

“With everything that the teams have had the go through leading up to this race with the new cars, it (dropping the double-file restarts) is probably one of the more sensible decisions that V8 Supercars could have made.”

The Clipsal 500 Adelaide event gets underway today with support category action ahead of the first V8 Supercars Championship practice session of the year on Friday morning.