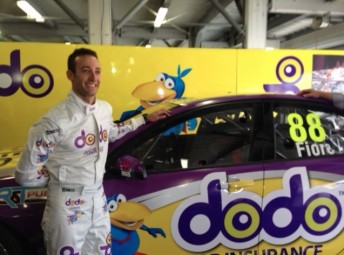 Triple F racer Dean Fiore officially took the covers off the new Dodo-backed Commodore which he will campaign under the Lucas Dumbrell squad.

Fiore parked his own licence which Kiwi Jonny Reid is running at Dick Johnson Racing, opting to lease it out to the Queensland team while he sought a drive elsewhere, eventually landing in a second Triple Eight-built Commodore for LDR.

The Melbourne-based driver took plenty of confidence after the recent pre-season test at Sydney Motorsport Park where he finished with the fourth quickest time in his new LDR ride.

“We are taking a little bit of confident (fourth at the pre-season test) going into this round from that early pace. Garth Tander said to be me later after the test that he would rather do the time that I did than the time that he did,” Fiore said.

“Lucas Dumbrell has got an awesome alliance with Triple Eight and with his other car for Scott Pye, that connection there is very strong.

“The equipment is there and the team is new. The ingredients are there to have a really good year.

Fiore is comfortable with his rather unusual arrangement of effectively seeking a separate drive and splitting from racing his own Triple F licence.

“The whole DJR thing happened and I’ve got a bit of control over it. I’ve done a formal lease with DJR and have entered it under Triple F Racing effectively the same as last year. The only difference is that I’m not driving there,” Fiore told Speedcafe.com

Dodo chief executive Larry Kestleman is embarking on another splurge in V8 Supercars after linking with several teams in the past including the Holden Racing Team and Tasman.

“We are now entering the car insurance and home insurance market and this is our foray into streaming the brand through to our customers through Dean (Fiore) and V8 Supercars,” Kestleman said.

“We are middle Australia. That’s who we live and breath with Australian families.”