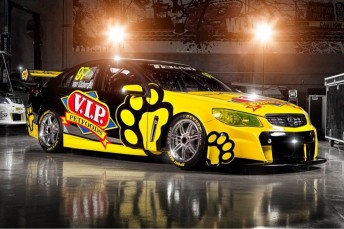 Tekno Autosports have taken the wraps off of Shane van Gisbergen’s V.I.P. Petfoods Commodore ahead of this weekend’s opening round of the V8 Supercars Championship at the Clipsal 500 in Adelaide.

The striking black and yellow livery features the familiar V.I.P. paw imprint, whilst the front of the car is predominantly yellow.

Van Gisbergen caused controversy earlier this year when he made a shock return with the Tekno squad after retiring from Stone Brothers Racing in November last year.

His team-mate, Jonathon Webb, is yet to unveil his car.

The Clipsal 500 gets underway tomorrow with the first V8 Supercars practice in the Car of the Future era to take place Friday morning.