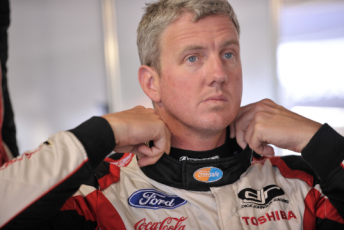 Steve Johnson will compete in the 2013 Carrera Cup title

Steve Johnson will compete in Carrera Cup on the streets of Adelaide this weekend, driving the Hunter Sports Group Porsche.

The long-time V8 Supercars driver was forced to step away from his seat at Dick Johnson Racing last week due to budget constraints at the famous team, however, a last minute deal will see Johnson remain a driver at the Clipsal 500 event, ableit in the one-mark Porsche class.

Johnson replaces Jonny Reid in the Hunter Porsche, who ironically will drive for DJR in the V8 Supercars Championship this year.

Johnson, now the General Manager of DJR, will compete in the entire championship, driving under the #17 – made famous by his three-times Bathurst 1000 winning father Dick Johnson.

“I said that my stepping down from DJR was only as a full time V8 Supercar driver this year!’ Johnson said.

“The good news is I will be on the grid in Adelaide and have a real crack at the Carrera Cup. It will be great to race with old foes such as Bairdo (Craig Baird) and Richo (Steve Richards) plus a lot of the young guns.

“I have enjoyed the endurance racing with the team but to move with HSG to the full series is a real buzz. These cars are fantastic to drive.”

Johnson is no stranger to Porsches, having taken two class victories in the Bathurst 12 Hour aboard the Hunter Sports Group Class B Porsche 997 over the past two years.