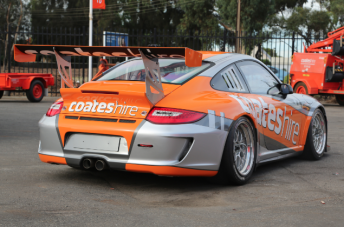 Nick Percat and Coates Hire have revealed the look of their Carrera Cup entry for the 2013 Porsche Carrera Cup Australia.

After three years in the Dunlop V8 Supercars Series, Percat steps into the all-Porsche championship this year, driving for Adelaide-based squad Team BRM.

He will make his debut at the Adelaide Parklands circuit – Percat’s home track – as part of the Clipsal 500 program this weekend.

It is a return of sorts for Percat to the team, having run some of his junior Formula Ford and Formula 3 racing with the team. He will also team up with former mechanic Roger Dutton,

Percat and Coates Hire have enjoyed a successful relationship since 2011 in V8 Supercars, a period which included his Bathurst 1000 win ‘on debut’ with Garth Tander.

Percat will continue with his familiar racing number 222 – a tribute to the Holden Racing Team’s numbers.

After a test at Winton, Percat is excited about the opportunity to race in the one-make class.

“I am very excited to be joining the Porsche Carrera Cup and want to thank Coates Hire for the opportunity,” Percat said.

“I am looking forward to the challenge of competing in a one-make series with everyone having identical cars. It will also be great to work with my old team at BRM once again.

“The Porsche Cup car does everything you want it to; it stops extremely well, turns extremely well and really puts its power down well. It is one of the best cars I’ve ever driven. It’s a fun car to drive and as a driver you are rewarded for driving it hard, which is good.”

Coates Hire’s marketing manager Jeremy Hill is confident that Percat will be a front-runner in Carrera Cup.

“We are delighted to support Nick as he moves into the Porsche Carrera Cup,” Hill said.

“Coates Hire Racing and Nick have enjoyed a successful partnership since 2011 and we are confident he will be highly competitive in this exciting championship.”

In other Percat news, the former Bathurst 1000 winner paid tribute to American rock legends Kiss by donning the band’s famous face make-up. Kiss will perform at the Clipsal 500 event on Sunday evening.

Here is video from the unveiling