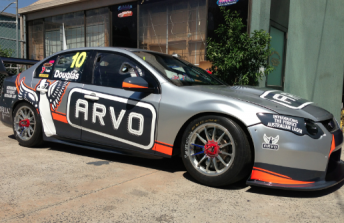 Taz Douglas will carry support of premium lager beer Arvo in his return to the Dunlop Series this year.

As first reported by Speedcafe.com, Douglas makes a return to the Dunlop Series having competed in the class between 2008-2011.

Douglas will compete in the team’s ex-Shane van Gisbergen Stone Brothers Racing FG Falcon. It marks the second time that Douglas and Image Racing ‘s team boss Terry Wyhoon have worked together after Douglas made his first Dunlop Series starts with the team in 2008.

The Victorian driver is looking forward to a competitive ride in 2013.

“For much of my career I’ve driven for myself, and engineered the car, so it was hard not to look at that option,” he said.

“I’ve known Terry a long time, and I have immense respect for him and what he’s achieved as a driver, and with the team – there’s no-one else I’d rather have working on the car.”

CLICK HERE for the full list of entrants for the opening round of the Dunlop Series this weekend.