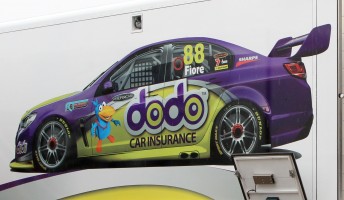 Having spent the 2012 V8 season with Dick Johnson Racing, Fiore switches to LDM this year, driving the team’s second car alongside Scott Pye.

Pye’s Commodore will be officially unveiled at the Adelaide circuit this evening.

It is a return to the sport for the Dodo brand, who was first seen in 2004 with Team Dynamik, followed by a year with Tasman Motorsport. Since then, they were seen with the Holden Racing Team (2006) and Kelly Racing (2009).

Dodo’s previous sponsorship with V8 Supercars have been with the company’s telecommunications arm.