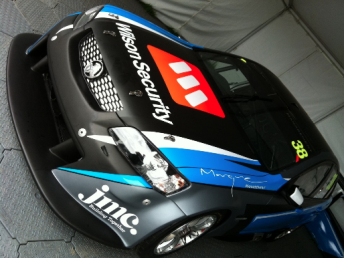 Daniel Gaunt will compete in the entire Dunlop Series after securing a late deal to race with Marque Management in its recently-acquired Triple Eight-built Holden Commodore VE.

The car was last raced by Tekno Autosports and will be prepared by Eggleston Motorsport alongside the team’s second entry for South Australian Jay Verdnik.

The former Carrera Cup driver returns to the Dunlop Series having competed in the class in 2009 with McElrea Racing, finishing fifth overall.

Team manager Rachael Wagg says that she is confident that Gaunt will be competitive in the expanded team.

“We are committed to running a top level team and I am confident that with the overall package of car, driver and team we will be towards the pointy end of the field,” Wagg said.

“Dan is a well respected driver amongst the paddock and with his experience and talent we are really looking forward to the 2013 season.”

The team will receive backing from Gaunt’s Carrera Cup sponsor Wilson Security, as well as the JMC Group and Caramel Creative for the Clipsal 500 round.

CLICK HERE for the full Dunlop Series entry for this weekend’s event in Adelaide.