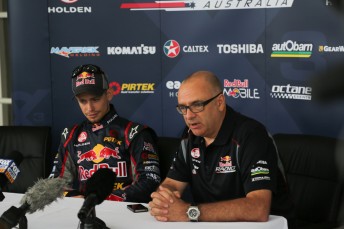 Triple Eight principal Roland Dane believes that Casey Stoner will surprise many with his speed on debut this weekend in the Dunlop Series.

Although the 27-year-old has only been able to undertake a handful of test days in his race car due to the category’s rules, he has spent extended time honing his skills in ride car vehicles, including a recent hit-out during a drive day event at Bathurst.

While Stoner says he’s nervous about being thrown into the pack on a street circuit this weekend, Dane believes that his new charge will adapt well.

“Hopefully we’ve put Casey in the right frame of mind where he’s relaxed and will be able to do a good job,” said Dane.

“From testing, he’s been exceptionally good in terms of commitment to wanting to get the job done as well as he can do to be quick.

“We’ve got to help him translate that onto the circuits over a race weekend. It’s up to us to do our part as well.

“But at the same time he’s got nothing to prove to anyone. He’s already made a bigger name for himself than what he would have ever dreamt of 10 years ago or so.

“He can have fun now, and I think he’ll produce some great results on four wheels.”