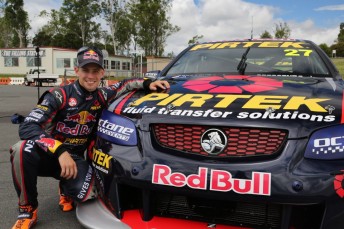 Australian MotoGP legend Casey Stoner admits to being a little nervous ahead of his V8 Supercar debut on the streets of Adelaide this weekend.

As previously reported, Stoner will compete in the Dunlop Series with Triple Eight this year after quitting motorcycle racing at the end of 2012.

Stoner’s V8 Supercar campaign was officially launched in Adelaide this morning, with the Holden that Craig Lowndes and Mark Skaife took to victory at Bathurst in 2010 resplendent in its new Red Bull/Pirtek livery.

CLICK HERE for Speedcafe.com’s story on the revealing of the Commodore VE.

Having undertaken all of his official testing alone at Queensland Raceway, being thrown into race conditions on a street circuit will be a major challenge for the 27-year-old.

“It’s a little nerve-racking,” said Stoner, who had to be given special permission by the Confederation of Australian Motor Sport to compete this weekend, such is his lack of four-wheel experience.

“It’s something very alien to me racing a car let alone with walls each side of me and not something I’m completely natural with yet, but I do want to go out and enjoy it.

“I have a fair idea of what’s involved, but unfortunately nothing can really replicate what I’ll have to do when I get out there.”

Stoner also says that it’s hard to know where he’ll fit into the 30 strong Dunlop Series field, which is expected to be headed by Ford Performance Racing’s young star Chaz Mostert.

“I have no idea where we’re going to be running,” he said.

“I first and foremost want to enjoy it, but, you know, I’m a competitive driver, I’ll still come out and we’ll see where our results end up. But at this point we have no real goals set, just to try and learn as much as we can, pick up what we can and see where we end up at the end of a weekend.

“I’m not expecting too much too early. But the racing looks like a heck of a lot of fun, so I’m looking forward to getting out there.”

The 2007 and 2011 MotoGP World Champion also admitted to being more nervous ahead of the weekend than he had been prior to his first MotoGP start in seven years ago.

“Back then I’d been racing bikes my whole life, and of course I was a little bit nervous. When you step up the different classes, because it’s all generally the same on two wheels, it’s not a big thing, but for me moving from two wheels to four wheels is something I’ve never done before.

“I’ll be a little more nervous, for sure, than I was going into MotoGP. But I’m also very excited.”

The Dunlop Series will conduct two races this weekend in support of the Clipsal 500 Adelaide.