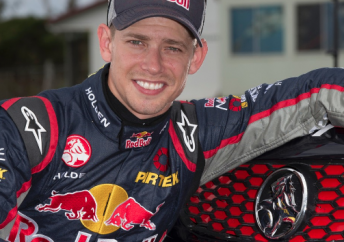 Casey Stoner has been announced as an official Holden ambassador

Before he has even competed in a four-wheel motor race, Casey Stoner has become an ambassador for General Motors Holden.

The two-time MotoGP world champion was announced as a official ambassador for Holden this morning when the 27-year-old unveiled his Red Bull/Pirtek Holden VE Commodore that he will drive in the Dunlop Series in this year.

Stoner, said to be a ‘Holden man at heart,’ is pleased with his new alliance.

“It’s great to be representing Holden. Holden is a part of Australian culture, so to be able to race one with Triple Eight is a fantastic opportunity,” he said.

“I’m really looking forward to getting behind the wheel, enjoying the car and the racing – it’s going to be an exciting year.”

Holden motorsport and sponsorship manager Simon McNamara says that Stoner is the perfect fit for the iconic Australian brand.

“Casey Stoner is an Australian sporting icon, and we are extremely proud to have him representing the Holden brand,” McNamara said.

“Before he rode to his sixth successive Australian MotoGP victory, it was Casey’s choice to drive to Phillip Island in a Holden.

“Casey is Holden fan, he is passionate about our brand and it is only natural for Holden to embrace him as he switches his career from two wheels to four.”

Stoner will make his V8 Supercars debut at this weekend’s Clipsal 500, driving in the Dunlop Series.

CLICK HERE for Stoner’s thoughts on his upcoming debut.