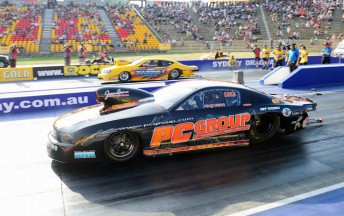 This weekend’s Westernationals at the Perth Motorplex – which doubles as the latest rounds in the ANDRA Drag Racing Series Top Doorslammer and Pro Stock Championships has been bolstered by the entry of American, Brendan Huhtala to the Pro Stock field, meantime the quality of the Doorslammer field remains red hot.

Huhtala joins the Jason Grima PC Group team. Whilst the Washington native is a rookie in Australian racing terms, he is no newcomer to the scene, crewing Grima’s regular entry.

The Pro Stock field sports one of its lowest entries in some time, just 14 teams making the trek to Perth for the event. The quality, however is by no means weak. Grima leads the series over Aaron Tremayne by 32 points, but Shane Tucker is just a further two points behind his fellow Queenslander.

In Top Doorslammer, 17 entries have nominated for the eight placings on race day as the category continues to grow stronger.

Current Championship leader, Peter Kapiris enters the event in good form, however Victor Bray has been enjoying one of his best seasons to date.

Back in November, Bray took his first ANDRA Championship event win in six years at the Motorplex, in the process setting his first pass in the five second bracket. The Sidchrome-backed racer is second in points entering the Westernationals, sitting some 38 points behind Kapiris.

Local hope, John Zappia hasn’t shown his dominance of recent seasons, sitting third in points, four points behind Bray. He has struck form at the right time though, winning the Slamfest event in Portland earlier this month.

The Westernationals get underway at the Perth Motorplex with qualifying on Saturday and racing on Sunday.