PIRTEK POLL: Who will win the 2013 V8 Supercars Championship?

PIRTEK POLL: Who will win the 2013 V8 Supercars Championship? 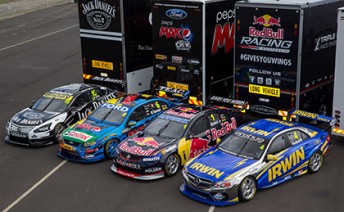 The 2013 V8 Supercars Championship opener is upon us, and the grid is set for what promises to be one of the most interesting and unpredictable seasons of all-time.

After a short two and a half month break since the final round of last year’s season finale in Sydney, the V8 teams have been burning their midnight oil preparing a field of brand-new cars for the Clipsal 500 in Adelaide this weekend.

The new Car of the Future regulations will see every entrant in a brand-new chassis – the first time that this has happened in the championship’s history.

But will all of this change affect the pecking order in the field? Red Bull Racing Australia’s Jamie Whincup and Craig Lowndes enter the championship as red-hot favourites, while their 2012 challengers Ford Performance Racing will be looking to put a bigger dent in Whincup and Lowndes’s winning ratio.

Relative to its performances in the past 15 years, the Holden Racing Team is in a dry spell, but drivers Garth Tander and James Courtney are hungry for wins in the all-new Commodore VF.

Brad Jones Racing surprised the pack at the pre-season test last week, topping the times. Is the team from Albury the dark horse?

Or will one of the customer teams spring a surprise? If there’s any team capable of doing that, it would have to be Tekno Autosports, armed with new driver signing Shane van Gisbergen.

There will be lots to talk about in 2013, but before the first real lap in anger is fired, who do you think will win this year’s championship?

Vote now on this week’s edition of the Pirtek Poll – only on Speedcafe.com.

And if you think you’ve got what it takes to tip the winners, join the Castrol EDGE V8 Predictor. CLICK HERE for full details on how to play.