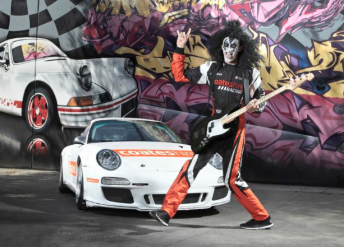 South Australian Carrera Cup driver Nick Percat has got into the spirit of the Clipsal 500 festival, donning the famous make-up of American rock band Kiss.

To generate interest in Kiss’s concert this Sunday night as part of the Clipsal 500, Percat spent over an hour in the make-up studio paying tribute to Kiss frontman Gene Simmons.

Percat, who won the Bathurst 1000 with Garth Tander in 2011, will make his Carrera Cup debut at the Clipsal 500, but is looking forward to seeing the legendary rockers on Sunday night.

“Kiss are really like rock royalty, so getting the chance to see them play is going to be cool,” Percat said.

“Hopefully we can celebrate at the concert after a couple of solid races in the new Coates Hire Porsche.”

After winning the Australian Formula Ford Championship in 2009, Percat has spent the past three years in the Dunlop V8 Series. This year, he will compete in Carrera Cup, and his new-look Coates Hire Porsche will be unveiled tomorrow.

See below for the concert line-up at the Clipsal 500.