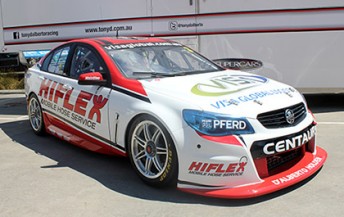 Hiflex will continue to back TDR in 2013

Tony D’Alberto has taken the wraps off his all-new VF Commodore – the car his team hopes will propel him towards the front of the V8 Supercars field.

Along with the reveal of the red and white livery, the single-car TDR operation confirmed the continued support from Hilfex Mobile Hose Service, adding to a new multi-year deal with VISA Global Logistics as its bonnet sponsor.

The new ‘red and white’ livery is timely, given the team’s return to Holden after two years campaigning Ford chassis. 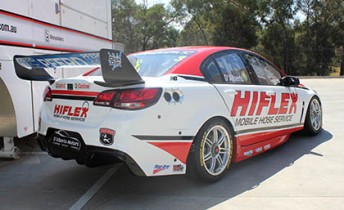 A rear view of the new Team Hiflex Commodore VF

The return to Holden is also a return for TDR to Walkinshaw Racing, securing a technical partnership, as well as sharing pit booms with Russell Ingall’s Supercheap Auto Commodore on race weekends.

With its new Holden deal and confirmation of its sponsorship portfolio for 2013, team owner Al D’Alberto says that his team is in a great position to rise up the grid.

“Hiflex was new to V8 Supercars last year, and they have fitted in really way. It’s going to be great to carry their colours again this year,” D’Alberto said.

“To be honest, we couldn’t ask for a better group of sponsors – big or small. Each and everyone of them is fully behind the success of the team, and we plan on improving our results and being a contender.

“Over the break, we’ve quietly been working hard to improve every aspect of our business, and as we get onto the track, I think that will become evident.”

Team driver Tony D’Alberto, a former winner of the Development Series, says that considering the changes amongst the category, it will be hard to predict the pecking order.

“I can’t wait to get into this year. It has been a huge off-season for all of the teams, but it will all be worth it when we get to Adelaide,” said Tony D’Alberto.

“It’s such a big year with the changes, so it’s hard to know where everyone is at.

“Until we all get to Clipsal and into qualifying, it’s all up in the air. The first few races are going to be very interesting to see where everyone is placed.”

The 2013 V8 Supercars Championship kick into action this Friday for the CLipsal 500 in Adelaide.