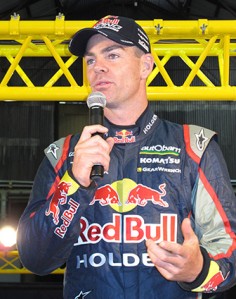 Craig Lowndes has been awarded the Peter Brock Medal, awarded by CAMS in honour of the motorsport legend.

The CAMS Peter Brock Medal is awarded annually to a driver who has shown similar character to the late nine-times Bathurst winner.

It is the second time that the award has been handed out, following its inaugural winner Jason Richards in 2011.

Lowndes was recognised for outstanding driver ability and commitment to the positive endorsement of motor sport within the greater community.

It’s an honour that Lowndes hasn’t taken lightly, given the personal connection he had with Peter Brock.

“Peter Brock was not only a personal mentor of mine but his positive attitude to life was an inspiration to so many people, right across the Australian community,” said Lowndes, a five-times Bathurst 1000 winner.

“He was a tremendous ambassador for the sport and an example I have always tried to follow, so I am honoured that the sport has chosen to recognise me with the medal awarded in Peter’s name.

“I hope I can set a similar example for the next generation in the sport.”

Nominees must have demonstrated outstanding driver ability while displaying a fair and sportsmanlike attitude, respect for authority and support, encouragement and motivation of and for their peers as well as a willingness and capacity to promote the sport.

CAMS Chief Executive Eugene Arocca says Lowndes is all those things and more.

“As we all know Craig Lowndes has been at the top of his game for some time, but he is also an outstanding representative of motorsport as a whole and he’s a top bloke to boot,” said Arocca.

“Craig is not only a worthy winner but a very popular one as well. It’s a credit to him.”

Lowndes will officially receive the award at CAMS Evening of Honour on Saturday March 16 as part of Grand Prix week in Melbourne.