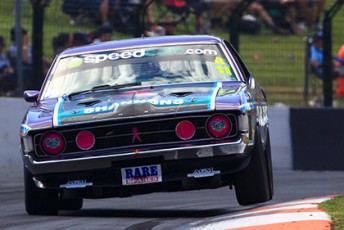 Gavin Bullas will enter the opening round of the 2013 Touring Car Masters season in a new car as he attempts to break John Bowe’s winning run in the popular series.

The two-time TCM champion and series director will drive the Phil Morris-owned 1973 Ford Falcon XA GT while an off-season rebuild of his #16 1969 Ford BOSS Mustang is complete.

Bullas says he is looking forward to the opening round, to be held at Sydney Motorsport Park alongside the Top Gear Festival event next month.

“I’m looking forward to getting on board another Ford in TCM to start the season.

“It’s been tough to sit back and watch some of the racing go on around me over last season, so the test this weekend will give a good overview of where Phil’s (Morris) XA is at, before my crew headed by Don Raper (ex-Formula 1 engineer), do a complete check and we’ll go from there.

“It’s certainly going to be different driving another car, with the Mustang and I having had many successes together, but it’s a new experience, and Phil’s team have put a lot of work into their TCM program over the years so I know that no sub-standard car would make it to their garage.

“My #16 Mustang will be back from a complete rebuild and ready for Round 2 when TCM go back to Perth, and there’s going to be some more exciting developments coming from our garage soon.”