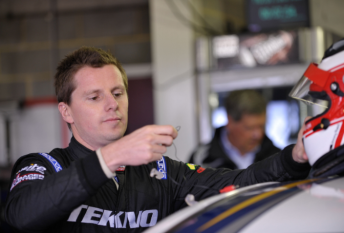 Jonny Reid competed with Tekno at Sandown and Bathurst last year. The #91 Holden failed to finish either race.

News of Reid’s appointment comes a day after the Queensland-based Ford squad confirmed that Steven Johnson would step down from driving, taking up a new role as general manager.

Reid will drive the #12 Wilson Security-backed Ford, while Blanchard steers the ADVAM-backed #17.

The 29-year-old Reid has spent the last two seasons in the Australian Carrera Cup Championship, finishing second on both occasions.

He returned to the V8 Supercars endurance events in 2012 for the first time in nine years, partnering Michael Patrizi at Tekno Autosports, having also completed a full-time campaign in his home country’s V8 SuperTourer Series.

“With Steve stepping down we had a number of younger drivers in our sights and Jonny was the stand out.” said team owner Dick Johnson.

“He has raced in a multitude of classes all over the world and has had great success. We saw him as a perfect fit.

“With renewed and enthusiastic sponsorship support we can really work on bringing these two blokes to the front of the V8 Supercar grid.”

“My aim since 2011 was to focus on a full time V8 Supercar drive,” added Reid, who co-drove the Hunter Motorsports Porsche with Steven Johnson to class wins in the 2012 and 2013 Bathurst 12 Hours.

“This is a world class series and after a great run in the enduros last year I was very hungry to try and step up. To be able to begin my fulltime driving with a DJR is fantastic. I have got to know Steve well and we spoke at length at the Bathurst 12 Hour.

“Once we knew the deal could progress and Wilson Security came on board the #12 DJR car it was full steam ahead. I am really looking forward to rolling the car out at Clipsal.”

The Clipsal 500 Adelaide will open the 2013 V8 Supercars Championship this weekend.