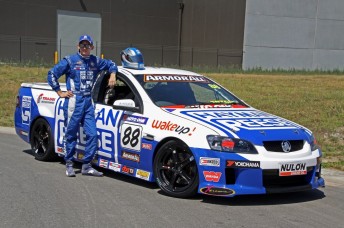 Former Shannons Supercar Showdown winner Jesse Dixon is preparing for a full season in the V8 Utes Series this year, but says he’ll need more racing experience before contemplating a return to the V8 Supercar enduros.

The 20-year-old competed in two V8 Ute rounds in the Chris Pither Scholarship Holden entry before making his Bathurst 1000 debut in 2012, and re-enters the support class in the Holden previously campaigned by Warren Millet.

“Doing two rounds in the Utes in 2012 was a really good experience and I’m looking to build on that this year,” Dixon told Speedcafe.com ahead of the season.

“It’s been a while since I’ve driven a Ute so we’re going to the opening round at Clipsal a bit raw.

“If I can be in the top 10 and score some solid points this weekend it’ll set us up well to move into the top five as the season unfolds.”

Thrown in the deep end at Bathurst last year, Dixon says he hasn’t chased a V8 Supercars co-driving role in 2013, and will not return to the top-level class until he has earned his stripes.

“This season I’m just focussing on doing a solid job in the V8 Ute Series,” he said.

“To be ready to do a good job as an endurance driver you really need to be in something like the Development Series or Carrera Cup.

“I’m happy to sit out for a year or two and make sure that I’m ready for when I do step back into that level.

“Last year was an exception and an incredible experience, but when I go back I want to make sure I’m ready.”

Harris’ campaign has received last-minute support from drink brand Tapout Energy, which will launch its product in Australia next month.