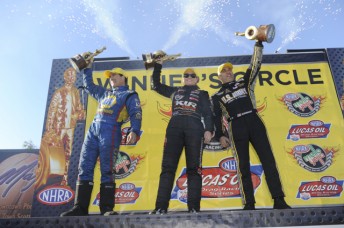 Ron Capps, Erica Enders-Stevens and Tony Schumacher were the big winners in Arizona

Enders-Stevens run to the final was far from easy, having to get past Shane Gray, V. Gaines and Jason Line to meet up with Edwards. To win the event was a dramatic turnaround for Enders-Stevens, who could manage just seventh in qualifying.

Edwards, who was the fastest qualifier, ended the run of round one winner Vincent Nobile in the second round, however Nobile retains a slender lead in the overall Championship. Enders-Stevens has cut the gap to 16 points.

The event was postponed early in the day due to fog. Cold temperatures and strong winds approached the venue throughout the weekend.

Tony Schumacher went one better than last weekend’s runner up placing taking the win. He edged out Morgan Lucas to take victory by the barest of margins. Schumacher crossed the line in 4.606 to Lucas’ 4.652 in what was a tyre smoking pedal fest.

Lucas got the holeshot from the line, but Schumacher was able to drive around to take the win and establish a significant points advantage.

Schumacher got past Sidnei Frigo, Khalid Al Balooshi and Antron Brown to get to the final, whilst Lucas got past Clay Milican, Australian Dave Grubnic and Spencer Massey.

“Both cars were set up to run really fast and we both lost it and smoked the tyres,” said Schumacher. “It was lift, pedal, lift, pedal all the way down. I could hear Morgan beside me the whole time. As a driver that kind of race is so much fun and I enjoy winning like that more than a record run.”

The other Australian outfit, Rapisarda Autosport International, was on target for the first Australian face-off in the semi-finals against Grubnic, however driver, Larry Dixon was eliminated in the second round by Spencer Massey. Earlier in the weekend, he qualified ninth quickest of the 18 car field and eliminated Brandon Bernstein in the first round.

Last round winner, Shawn Langdon didn’t make it past round one, losing a pedal fest against Top Fuel debutante, Leah Pruett.

Schumacher’s lead in the Championship over Langdon is already out to 79 points.

Ron Capps has swept to the top of Funny Car points after taking a dramatic victory over Matt Hagan. He blasted down the Arizona strip in 4.064 to Hagan’s 4.158 seconds. Hagan did get out of the blocks quicker in the final however.

Capps eliminated both Tony and Cruz Pedregon before advancing to the final through Tim Wilkerson.

Meantime, Hagan got to the final round at the expense of Phil Burkart, Bob Tasca III and John Force, who made a welcome return to the semi-finals in the Castrol GTX Mustang.

Round one winner, Courtney Force was eliminated in the opening round by Todd Lesenko.

Capps leads the pointscore by 45 points.

The next round of the 2013 NHRA Mello Yello Drag Racing Series will be held in Gainesville, Florida over the weekend of March 14-17.