World Superbikes at Phillip Island for another three years

World Superbikes at Phillip Island for another three years 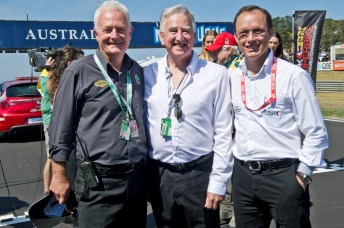 Phillip Island’s reputation as the home of world class motorcycle racing has been given a further boost with the Victorian Government announcing a three-year extension to the Superbike FIM World (SBK) Championship event.

The Superbike Championships have been held annually at the Phillip Island Grand Prix Circuit since 1990.

Speaker of the Victorian Legislative Assembly and Member for Bass Ken Smith made the announcement on behalf of Tourism and Major Events Minister Louise Asher at the Phillip Island Grand Prix Circuit.

“The Government recognises the importance of the World Superbikes as part of Victoria’s regional major events calendar and I am thrilled to announce another three years– which means another three years of economic stimulus and promotion of Phillip Island through national and international media and broadcast exposure.”

According to an Ernst & Young report, Phillip Island’s hosting of World Superbikes will deliver an economic benefit to Victoria in the range of $22 million per annum.

“World superbikes locked in and ready to race till 2017 ensures sensational action for years to come for both riders and fans, and gives us the confidence to further invest in the track and its facilities.”

Javier Alonso, Managing Director, DORNA Group, the global rights holder of the Superbikes World Series said Phillip Island is a special place and a unique track in a unique location.

“It’s a great test for riders and a challenge for teams.

“The result is thrilling racing for fans whether they are cheering trackside or watching on television from anywhere around the globe.”