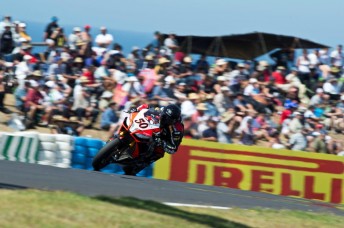 Frenchman Sylvain Guintoli has led an Aprilia clean sweep of the top three places in the opening Superbike World Championship race of the season at Phillip Island.

Guintoli, 30, passed factory team-mate and long-time leader Eugene Laverty on lap 15 of the 22-lap race, and then eased away to a 1.352-second victory – his fourth in WSBK competition and his first at Phillip Island.

After being passed by Guintoli, Laverty then fell into the clutches of the hard-charging Michel Fabrizio over the last few laps, but he managed to hold off his opponent in a thrilling battle all the way to the finish line.

The four-way arm wrestle for fourth position was just as intense, with BMW’s Chaz Davies eventually working his way to the front of the pack after 22 hard-fought laps, with Tom Sykes (Kawasaki), Loris Baz (Kawasaki) and Leon Haslam (Honda) filling positions five to seven.

Spaniard Carlos Checa (Ducati) and world No. 3 Marco Melandri (BMW) both failed to finish after a nasty collision at turn four on lap 13 while involved in the fierce scrap for fourth position.

Checa briefly lost consciousness and was airlifted from the circuit with concussion.

Race two is at 3:30pm this afternoon.