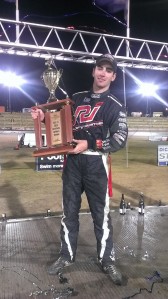 Shane Stewart had to go all out to try and win the ENZED World Series Sprintcars Championship at the Perth Motorplex and starting on row five for the feature, the Monster Energy pilot looked as though his chance may have expired.

Unfortunately for the field, the Oklahoma racer grabbed the American-style Motorplex and scythed his way forward to take his third feature race victory within two weeks.

Luke Dillon led for much of the feature race, looking to end his season the way it began, however he seized his machine with seven laps to go, opening up not only the race but the Title fight.

Another to come from deep in the field was Kerry Madsen. Fresh from the US where he competed in the World of Outlaws opener last weekend at Volusia in Florida, Madsen charged his way forward to end the night in second position.

Third was James McFadden. After having to come through the B-Main, the defending Champion hadn’t been happy with his performance at the Motorplex to date, which saw him miss the Preliminary A-Main. But getting into the main night feature and defending his Championship saw the Australian Title Holder lift to another level.

Preliminary night feature winner, Steven Lines also met the fate of Dillon. Whilst battling for the lead he went too high mid-race and rolled, ending his chance of taking out the Championship.

Krikke Motorsport’s American, Tim Kaeding was fourth, with Ian Madsen, Robbie Farr, US veteran Randy Hannagan, Carl Dowling, Daniel Pestka and Trent Pigdon rounding out the top 10 and were the only other cars to finish the main event.

The Championship victory affirms McFadden’s position as the universally popular dominant force in Australian Sprintcar racing and the Scott Milling owned Totally Workwear team as one of the best in the country.