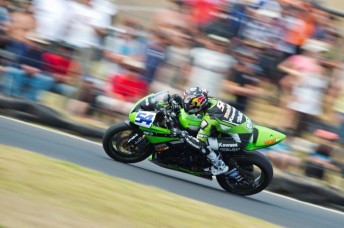 Kenan Sofuoglu on his way to victory at Phillip Island

Aboard his exceptionally fast ZX-6R, Sofuoglu won the 15-lap event by 1.899 seconds, but it was his outstanding work rate in the last three laps that made sure of victory, including a new lap record on the last lap – 1m33.298s.

The victory adds to Sofuoglu’s previous successes at Phillip Island in 2009 and 2012, and he has now won 22 WSS races in an outstanding career that is yet to show any signs of slowing down.

Lowes led for major parts of the race, but all his hard work around the back of the circuit came undone when Sofuoglu blasted straight back past along Gardner Straight.

But it was still a sensational start to the season for Lowes, as it was for third-placed WSS rookie Michael Van der Mark (Honda), who made it three separate manufacturers on the podium.

The 20-year-old Dutchman even held the new lap record for a while, but lost touch with the leaders in the last few laps.

Van der Mark finished 6.771 seconds behind Sofuoglu, with Fabien Foret and David Salom in fourth and fifth on their Kawasakis. Foret charged back through the field after a poor start from the front row of the grid, which saw him back in 20th place on lap one.