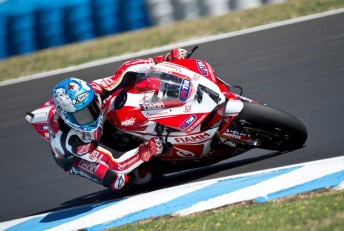 Polesitter Carlos Checa has continued to set the pace on his factory Ducati in the final World Superbike warm-up session at Phillip Island ahead of this afternoon’s season-opening 22-lap races.

All the other big guns such as Aprilia’s Sylvain Guintoli, BMW duo Chaz Davies and Leon Haslam and Honda team-mates Leon Haslam and Jonathan Rea got through the session unscathed, and now all is in readiness for the opening 22-lap race at 12:00pm.

Australians Glenn Allerton (BMW) and Jamie Stauffer (Honda) also completed their shakedowns with a minimum of fuss, as they prepare to the give the international riders a real hurry-up in today’s races.

In the World Supersport warm-up, world champion Kenan Sofouglu (Kawasaki) was fastest, ahead of the ride who had previously dominated every session this weekend, Yamaha rider Sam Lowes.

But the man on a mission was Australia’s 20-yaer-old Josh Hook (Honda), who went half-a-second-second faster than his best qualifying lap to really et himself up for a crack at a top 10 finish in this afternoon’s race at 1:30pm.