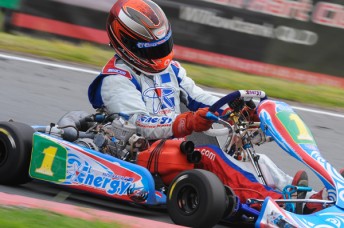 Chris Hays on his way to victory in Ipswich
(Pic: AF Images/Budd)

The pair were locked nose to tail for much of the 25 lap affair, Hanssen – a Dutchman – threw everything in his extensive international arsenal to get past Hays, however the young driver was just too good.

“The pressure this weekend in having Joey in the field just stepped everything up a notch,” admitted Hays. “The racing was tough from the very first practice session. We had to be on the limit to hold Joey out.”

“It was difficult out there, the weather was hot and I had to work hard just to stay with Chris, let alone try and get around him.

“I have to take my hat off to him, he didn’t put a wheel wrong at all. The Ipswich track is very tough – among one of the best I’ve been to – and I did everything I could to get past Chris, but he was too good in the end.”

Earlier in the day, Hanssen took the first final and was awarded the Queensland Championship in the Pro Gearbox category. Gladstone’s John Grother finished third. 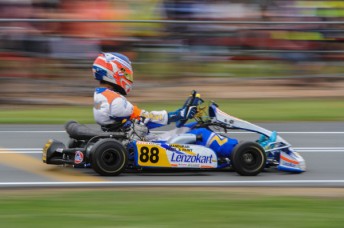 “It’s very pleasing to get this result, it’s been hard work over the off-season to try and get everything together,” he said. “Last year wasn’t a great year for us in the Stars of Karting, but this year couldn’t have started in any better fashion.”

The elite Junior category in Australian karting, Pro Junior (KFJ) was a story of woe for many of the leading contenders.

In the first final, Andrew Kahl held a 2.7 second advantage before a mechanical failure put him to the sidelines. James Abela took the win, however was later handed a 10 second penalty for a starting infringement. 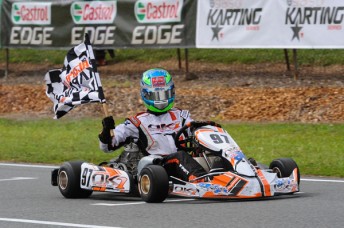 Kahl put in a super drive in final two to pass 15 drivers to finish third.

Abela was second and the winner was Victorian, Liam McLellan.

It is McLellan’s first full season in the Series and after a troubled day yesterday finished second in the first final, then won the second race in emphatic fashion.

In the Rookies category, Oscar Piastri made the trip from Melbourne a successful one by taking the win ahead of local drivers Harrison Hoey and Ryan Suhle.

The next round of the CIK Stars of Karting Series will be held at South Australia’s Bolivar Raceway on April 27/28.