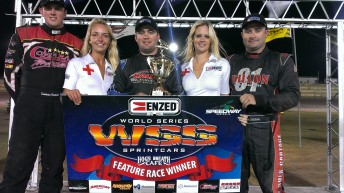 Despite drifting to third place in the ENZED World Series Sprintcars standings last weekend in Bunbury, Steven Lines has proved the Championship tilt he and the Bridgestone-backed Hall Motorsport team has will go right down to the wire tonight by winning the Preliminary feature at the Perth Motorplex overnight.

Under threatening skies, Lines was able to take out the preliminary feature from Cameron Gessner and Luke Dillon.

Championship leader, James McFadden had a less than stellar night, finishing well down the order in qualifying and then was unable to make it through the B-Main, finishing that race in seventh placing. Despite that, he holds a 218 points advantage over Shane Stewart, with Lines cutting to a further 18 behind the American.

Just when it appeared that Lines – whose had his share of bad luck throughout the season – was going to come across the line for a dominant win, the front axle fell out of his #3 machine, however the advantage he had still allowed him to stand on top of the dais.

Emerging South Aussie, Daniel Pestka in the Gawler Farm Machinery car took to the wide open spaces of the Perth Motorplex was one of the hard luck stories of the night. Sitting well in second placing, he went around a lapped car and then crashed heavily and out of the feature race.

Tonight, the 2013 ENZED World Series Sprintcars, presented by Hog’s Breath Cafe Championship will come to its conclusion at the Perth Motorplex.